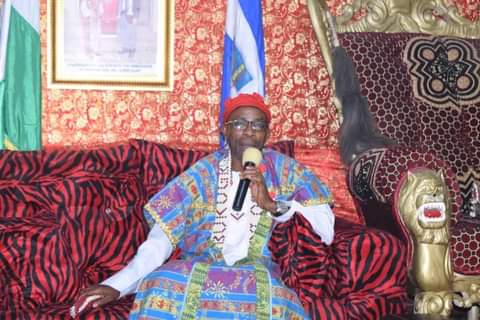 The Igbo World Union, IWU has encouraged the Independent National Electoral Commission, INEC to ensure that eligible Nigerians living in diaspora exercise their franchise in the forthcoming 2023 general election.
Recall that the INEC boss Mahmood Yakubu had disclosed that the commission had had several meetings with the Nigerians in Diaspora Commission, NIDCOM and was ready to “roll out” diaspora voting to enable more eligible Nigerian citizens working in diplomatic missions or those permanently living abroad to vote; but however said it will require amendment of the 2010 Electoral Act by the National Assembly.
The Gburugburu Ndigbo Dum and President General of IWU Sir Mishak Nnanta KJW, KSM, JP who spoke to our correspondent in Umuahia, Abia State observed that Nigerians living in diaspora are desirous of participating in the forthcoming general election in order to enthrone and promote  good government, as obtainable in other neighbouring countries.
Nnanta who also observed that about 116 estimated countries have a system that allows their emigrants to fully participate in their electoral process through external voting, opined that Nigerians in diaspora who have contributed significantly to nation’s economy, should be encouraged to exercise their right to vote in the electoral process.
Nnanta, who is the Ambassador Ndigbo in Diaspora also urged registered voters of the Southeast extraction and particularly Abians living far distances from the State to apply for voter transfer ahead of the 2023 general elections, in order to vote in the right candidates that will revamp the economy of the State and Southeast in general that is in near comatose as a result of poor governance.
He described the year 2023 general election as a serious business which requires all hands to be on deck to change the narrative.

The IWU President General moreover lauded the efforts of the INEC chairman, Mahmood Yakubu, who recently urged media organisations to sensitise registered voters to transfer their polling units to the nearest units for convenience on election days.

He passionately appealed to Abians of voting age who are yet to participate at the ongoing Continuous Voter Registration CVR physical exercise which ends 30th of June, 2022 to do so at the respective INEC local offices across Abia State.

Nnanta further encouraged them to be part of Abia residents and citizens who will rewrite the history of a new Abia in 2023 with their voting power.